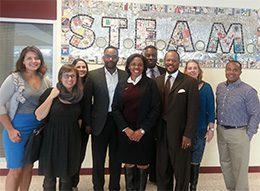 Representatives from League of Education Voters and community-based organizations recently traveled to Baltimore, Maryland, to learn more about the discipline reforms that have been implemented by Baltimore City Public Schools with great success. Upon their return, each member contributed to our blog series, “Transforming School Discipline: Lessons from Baltimore.” The post below introduces the series, which will run through mid-December.

LEV first started looking at school discipline as part of its work on reducing the opportunity and achievement gaps in schools, and when we asked parents and community members across the state what they were most concerned about, we kept hearing their concerns about discipline. Conversations about the data followed, and we learned about the link between discipline and the achievement gap. While the people we spoke with were worried about safety in the schools, they felt like it didn’t make sense to kick kids out of school because the punishment wasn’t linked to the student’s behavior.

The conversation surrounding discipline started in earnest after the US Department of Education began investigating Seattle Public Schools for disproportionately disciplining African American students, and we began looking around the country at areas that “look like” Seattle in terms of disproportionality to observe alternative discipline methods in practice and speak with school leaders who are making a different in school discipline.

Baltimore City Public Schools began implementing discipline reforms in 2008 under former CEO Andrés Alonzo, and those reforms have continued under Interim CEO Tisha Edwards. Since the new discipline policies and practices went into effect, out-of-school suspensions have dropped from one in five students to one in eight, and the dropout rate fell by almost four percentage points in three years (from 7.9 in 2008 to 4.2 in 2011).

Baltimore’s work on discipline has encouraged school leaders across Maryland to reexamine their discipline practices, and the Maryland State Board of Education released a groundbreaking study on discipline in 2012.

We invited community and school leaders to join us on our trip, and were pleased to have a final team of nine, including myself: Carey Anderson, Reverend of First African Methodist Episcopal Church; Linda Mangel, Education Equity Director at the American Civil Liberties Union of Washington; Tre’ Maxie, Member of the Washington State Board of Education; Tony Moore, School Board Member for Federal Way School District; Andaiye Qaasim, Community Organizer at LEV; Beth Richer, Government Relations at LEV; Tracy Sherman, Policy Analyst at LEV; and Reggie Witherspoon, Reverend of Mount Calvary Christian Center.

Our expectations for the trip were exceeded at every level thanks to our Baltimore hosts. We were able to visit a traditional high school and an alternative high school. We spoke with Baltimore City Public Schools’ Interim CEO, an implementer of the discipline reforms; with Robert Murphy of the Maryland State Department of Education; and with four advocacy groups who are working toward clearer policy and instructions statewide.

When we spoke with Baltimore Public Schools’ Interim CEO Tisha Edwards, she said two things that particularly struck me. She talked about when they were first implementing the discipline policy changes; they needed a building to house the students who had committed the worst offenses (e.g., arson, bringing weapons to school), but no communities wanted to accept those students, so the former CEO said, “These are our kids—they belong in our building,” and he restructured the district administrative building to accommodate those students. That acceptance came across in every conversation we had, with every person we talked to.

The other thing that Edwards said that resonated with me was that when a teacher suspends a child from the classroom, the rest of the class knows that the teacher does not have control of the class, as does the child being suspended. So suspensions don’t solve the problem—they exacerbate it.

While the discipline legislation that LEV helped pass in 2013 is a strong first step, we look forward to working with our partners across the state to continue working toward better, alternative discipline policies that keep kids in the classroom and help reduce the opportunity and achievement gaps. We will continue sharing our insights throughout this blog series, and we look forward to your engagement and support of our work.

Kelly Munn is the State Field Director at League of Education Voters and spearheaded the trip to Baltimore. She has been a dedicated education advocate for over ten years.