Activist of the Month: Linda Lozano

At the League of Education Voters (LEV), we recognize all of the hard work that you do toward improving public education across Washington state. We are pleased to announce our Activist of the Month for June: Linda Lozano. Read more about her experience as an activist and advocate for her community, her family, and everyone around her. 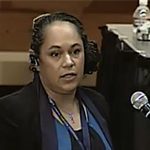 It’s something of an understatement to say that the odds were against Linda Lozano from the very beginning. Born to a teenage mother, Linda essentially raised her younger sister after she was born—and Linda was just seven years old.

Linda learned a “culture of abandonment” from an early age, and she says she was angry for a long time. Linda openly admits that she made a lot of bad choices as a young adult, some of which landed her in jail, and some of which caused her kids to be taken by Child Protective Services.

“Sometimes in life, the stage is set for us. We know we want something different but don’t know how to achieve it,” says Linda.

So Linda set out to learn how to achieve something different.

She successfully fought to get her kids back and relocated to Yakima County. As her third child started school, she realized that her child had learning challenges and that she needed to learn to navigate the school system and learn her rights as a parent in order to best support her daughter.

Using her mantra, “knowledge is power,” Linda began working with the Yakima Valley Systems of Care on a pilot program with the National Alliance on Mental Illness (NAMI) to learn about all aspects of the education and social services system and to provide wraparound services to families and children who needed ongoing help.

Through her training as a Family Partner for NAMI Yakima, Linda says she found her own voice and was better able to advocate for both her family and for the families she was supporting. She also saw a pattern in the families she was supporting—the parents were better able to understand and solve the problems they and their families were facing when they understood the system. “Parents need to understand that they do have a voice and that it can make a real difference.”

LEV Field Organizer Micaela Razo first met Linda through the Washington State PTA. Micaela says she had seen some of Linda’s presentations on mental health and advocacy but what especially stood out was the impact Linda has in her community. “She not only engages with young people and students with mental health issues, she engages with everyone in her community. She meets everyone where they are.”

Linda recently testified at the Office of the Superintendent of Public Instruction’s (OSPI’s) discipline rules hearing in May, and she says it was a rewarding experience to be able to advocate for other. When describing why she testified, Linda says, “It’s not okay to re-traumatize a child who has already experienced trauma.” Linda’s testimony is embedded below.

Linda is taking on the role of the Legislative Chair for Region 11 of the Washington State PTA, so rest assured, we’ll be seeing her in Olympia frequently in the future.