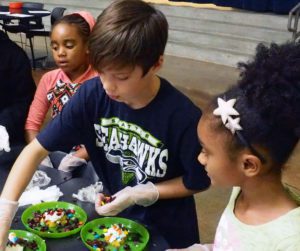 Kids Co. is a Seattle-area quality childcare provider that has partnered with South Shore PK-8 since the school opened in 2002. Kids Co. has provided millions of dollars in scholarships with help from the New School Foundation and the League of Education Voters. Nearly 60 percent of all children who attend Kids Co. at South Shore qualify for free or reduced lunch (FRL), and receive these scholarships.

Every day, Kids Co. sees the parents of the kids served, so they get to know the families – their ups and downs and financial struggles – and it’s all about relationships. Their summer programs serve kids K-5, and the kids from different grades learn to work together and support each other.

Kids Co. supplements meals, and they teach kids how to create a nutritious meal on a budget, instilling these skills in children as young as 5 years old. At South Shore, the Kids Co. classroom features a full kitchen, and is able to prepare hot, fresh meals.

President and CEO Susan Brown says, “The school day begins when the kids wake up. Kids spend more time in childcare than in school.” During summer, that can be as many as 11 hours a day for working parents, and 5 each day during the school year. Susan adds, “Nobody is turned away because of lack of funds.”

Each week, the summer day camp program at South Shore focuses on a different theme, from detective skills, to learning social skills through board games, to science experiments. I, along with League of Education Voters staff and board, had the pleasure of joining them during their Sweet Tooth week, which featured their take on the popular Food Network Chopped competition. 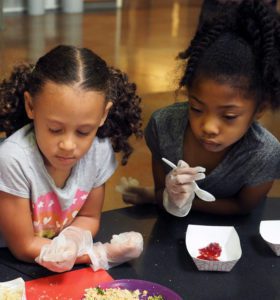 In Chopped, chefs call on their culinary skills as they face off against one another to prepare a spectacular three-course meal consisting of an appetizer, entree, and dessert. The catch? In each round, the chefs have to use all of the ingredients the show provides them, however unlikely they might be (Swedish Fish, anyone?). At the end of each course, a panel of three guest judges evaluates their offerings based on taste, presentation, and creativity.

In the Kids Co. version, the 15 students were divided into three teams, which were judged on presentation, creativity, and flavor. And, just like on TV, each team was given a large paper bag containing the ingredients to work with. Kids were challenged with creating a main dish and a dessert from canned tuna, macaroni noodles, cilantro, canned peaches, dried cranberries, chocolate chips, Cool Whip, and M&Ms. Teams also had an array of spices to use, which included cinnamon, black pepper, chili powder, taco seasoning, sugar, strawberry jam, spaghetti sauce, ranch dressing, barbecue sauce, and Frank’s Red Hot sauce.

Susan Brown says, “I like the Chopped competition because the kids learn collaboration and team building skills, and they also get to learn knife skills even if it is with a plastic knife.” I appreciated the creativity in not just their culinary concoctions, but also in the names of their dishes. One team had the inspiration to change the name of their dessert from “Monster Poop” to “Delicious Blast.” Other memorable names included “Healthy Neighborhood” for a main dish and “Volcano Mountain” for a dessert.

Although many of the creations had a similar taste, the winning team mixed cinnamon with their chocolate chips, and used a swath of hot sauce to moisten and liven up their tuna pasta. As a judge, I found joy in watching the anticipation in the kids’ faces as I evaluated their offerings, and I wished every child could have the opportunity to participate in a Chopped competition at their school. 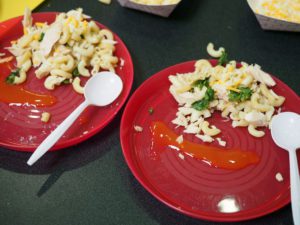