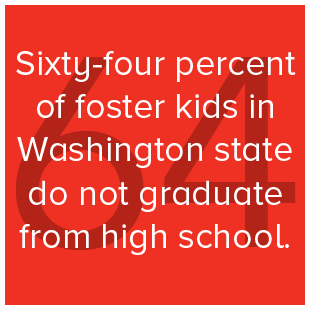 They graduate at a lower rate than any other category of students—homeless kids, kids who speak limited English, children of immigrants—they all graduate at a higher rate. It’s easy to see how Jane could have been one of those statistics—some kids and parents just don’t have the fight in them to succeed.

I represented a teenage boy in foster care as a CASA (Court Appointed Special Advocate)—a very smart kid who was in a terrible placement and on the same downward spiral of discipline that Jane was on.

Except that, instead of looking for positive solutions, his foster parent had him arrested over and over again for things that other kids get grounded for. This boy is needlessly failing classes and already planning to drop out. At the moment, it’s only the thug life that this boy can see. Professionals are lining up to tell him he needs to stand up and “be a man,” but no one is teaching him what, if anything, that means.

I was asked recently if anyone in foster care has asked me how Jane found the road to success while so many other kids did not. The short answer to that question is “no.”

To everyone who will listen I say this: sixty-four percent of foster children will not graduate from high school this year.

This is not an inevitable statistic.

The League of Education Voters has done quite a bit of work on the school-to-prison pipeline—but it wasn’t until I saw it close up that I realized how entrenched the pipeline is in our schools and our society. When we wonder where our homeless population comes from and where criminals are made, all we have to do is look around our public high schools to see which kids are in the principal’s office without an advocate ensuring they get the treatment they deserve.

This fall Jane will be applying to college, something that I was told was impossible way back in the eighth grade. She told me back then that she wanted out of special education, off medication, and to have a better life than her parents. I have kept those sentiments as goals and held to them, and so has she. It’s not been easy in the same way that any kind of parenting isn’t easy—but it’s no secret, and she’s not a statistic, not one of those kids in the sixty-four percent.

Emma Margraf is a writer and a foster parent in Washington state. She writes mostly about foster parenting and nonprofit life, but she aspires to be a food and travel writer and to make the perfect grilled cheese.