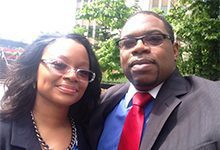 At the League of Education Voters (LEV), we recognize all of the hard work that you do toward improving public education across Washington state. We are pleased to announce our Activists of the Month for October: Quontica and Marlando Sparks. Read more about their experience advocating for parent engagement and their plans to open a public charter school for at-risk youth in Pasco.

Quontica and Marlando Sparks first testified about education in Washington state this past April, when they spoke about the impact of school discipline on families they worked with. But their involvement in education advocacy started much earlier.

For Quontica, it began when she was still a child. She was raised by her grandmother, who worked fulltime, along with a number of cousins. As the eldest grandchild, Quontica says she took on a role of caring of her brother and cousins, helping them with school, and even going to school conferences when her grandmother was not available. Quontica learned her way around the school system in order to advocate for her brother, cousins—and herself.

Quontica and Marlando have both worked for their school district, so they are familiar with the way the public school system works. Quontica says that they were two of a handful of African American staff members in the district and many parents in the community approached them for help and advice in navigating the system. Through word of mouth, Quontica and Marlando became the de facto experts in their community on parental rights and advocacy within the public education system.

LEV Community Organizer Micaela Razo learned of their work in the community and approached them to testify about school discipline to the Office of the Superintendent of Public Instruction (OSPI). They also testified this summer about the College and Career Ready Diploma.

The latter was particularly meaningful to them, because Quontica and Marlando believe that parent engagement can be the deciding factor between a child’s success or failure. In their case, Quontica and Marlando’s oldest son had an Individualized Education Program (IEP) and ran into a few obstacles with the special education system in school. In addition, the family lived in Oregon for two of the years that their son was in high school, and the coursework their son completed in Oregon did not align with Washington state curriculum. “The only way he made it through high school and moved on to college,” says Quontica, “is thanks to his determination and our unwavering engagement and involvement.”

But Quontica says they reflected on more than their own children or their own experiences in developing their testimony: “At my job in the district office, I watched so many kids trying and failing to make it through. Their stories all too often had a sad ending, and I want to change that.”

Quontica and Marlando want to work to help more kids succeed, and they plan to achieve that dream by opening a public charter school that focuses on at-risk youth. “When you look at ‘at-risk,’ it doesn’t start in middle or high school—’at-risk’ starts at birth. We want to help children and their families from the very beginning. It’s going to take all of us to make a difference.”

Quontica and Marlando plan to provide wraparound services for families and their children from preschool through high school, with every graduating student completing high school prepared for college. They have applied to the Washington State Charter Schools Association’s Leadership Center and will learn mid-October if they have been selected for a fellowship.

Regardless of what the future holds for Quontica and Marlando, you can rest assured that they will be engaging with, and advocating for, parents and youth throughout their community—and throughout the state.