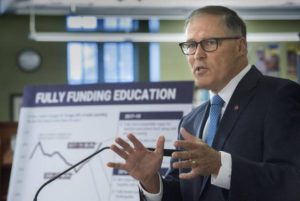 Today, Governor Inslee released his 2018 Supplemental Budget Proposal. The Governor recommends an increase of $950 million for the 2018-19 school year to fully fund K-12 staff salaries a year earlier than the education funding plan passed during the 2017 legislative session. The Governor’s proposal would comply with the recent Washington State Supreme Court order that the state must fully fund basic education by the 2018-19 school year.

The additional investments in education will be funded through higher than expected revenue collections by the state and a transfer of funds from the Budget Stabilization Account (Rainy Day Fund). This would reduce budget reserves to 4.8% of the general fund expenditures according to current revenue projections.