Map compares cost of living across the U.S.

As a part of their Out of Reach 2012 campaign, the National Low Income Housing Coalition (NLIHC) has compiled wage and rent data from all over the country and created a map to compare the hourly wage needed to afford a two bedroom home at 30 percent of income. This is referred to as the housing wage. 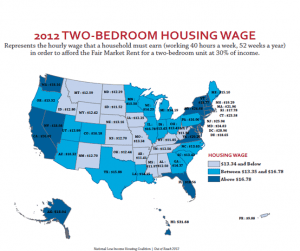 According to NLIHC, the map”demonstrates that a mismatch exists between the cost of living, the availability of rental assistance and the wages people earn day to day across the country. The Housing Wage consistently exceeds the actual wages earned by renters, in both urban and rural communities nationwide.”

NLIHC also created a map to see how many hours a person earning minimum wage would need to work in order to afford a two bedroom house at fair market rent. 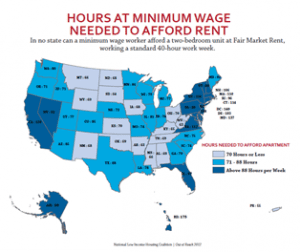 In Washington, a person earning minimum wage would need to work 80 hours a week in order to afford a two bedroom home paying 30 percent of their income. The highest disparity was found in Hawaii with minimum wage earners needing to work 175 hours and Washington D.C. came in second with 140 hours.

The full report can be read here.