Specializing in the impossible

Highline Public Schools has been in the news over the last few years regarding its work on school discipline, and for good reason. The district’s out-of-school suspensions and expulsions have dropped precipitously since 2006, when the district began implementing positive behavioral interventions and supports, known as PBIS, in its schools.

And Highline Superintendent Susan Enfield has a bold goal—zero out-of-school suspensions (except those necessary for safety reasons) for her entire district by 2015.

She and Highline School Board Director Sue Goding presented at the Washington State School Directors’ Association (WSSDA) conference in late November about their district’ work transforming school discipline. They recently sat down with the League of Education Voters to talk about the district’s journey from traditional, punitive discipline to PBIS.

According to Sue, it all started in 2006, when a couple of elementary school counselors attended a school board meeting and told board members that they had begun implementing PBIS in their schools. Based on their presentation, the board decided to expand PBIS throughout the district.

During this implementation, the district learned a lot, and it was not enough to simply focus on PBIS, Sue says. “Every step of implementation showed us something else that needed to change.” As though it were a chain reaction, implementing PBIS demonstrated that the district needed to change its discipline policy. Next, an equity policy. Then, re-training school security guards so that their focus was less on security and more on safety.

Susan joined Highline Public Schools as superintendent in 2012. By that time, PBIS was well established in elementary schools, she says, but less so in secondary schools. Highline has been focusing on secondary school implementation and beefing up supports. This year, the district has a reengagement specialist in every middle and high school.

What they learned is that the vast majority of suspensions were due to student defiance. So, they eliminated defiance as a suspendable policy. “We’re not saying there shouldn’t be consequences for bad behavior—there should. But the consequence for a student’s defiance shouldn’t be his or her high school diploma. We need to turn tough moments into teachable moments,” Susan says.

But the work is just starting, according to Susan. The next step for the district after PBIS is restorative justice. In addition, this year is “going to be difficult,” Susan says. The students who still have discipline issues at this point are the ones who have serious problems and need more help than what the schools can provide. Susan believes this year is going to demonstrate that districts cannot do it alone and that they need more supports and wraparound services.

“I see this, ultimately, as a critical, high-level strategy to high school graduation. By connecting the dots between discipline, student supports, and academic success, we’re going to raise our graduation levels.” But to do that, Susan says, “We need to get bold.”

This work reminds Susan of Theodore Roethke’s quote: “What we need is more people who specialize in the impossible.”

To the League of Education Voters, it sounds like that quote describes the administrators and teachers at Highline Public Schools. 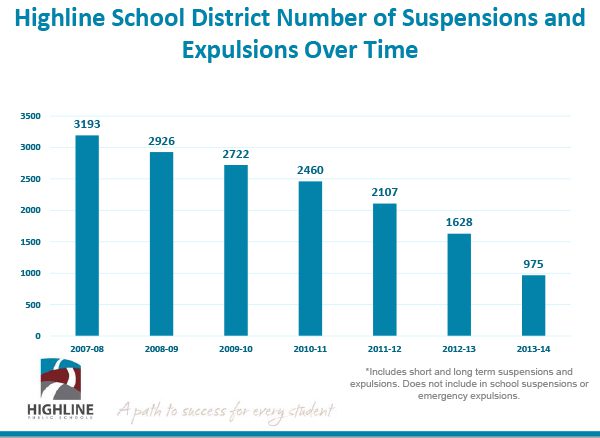