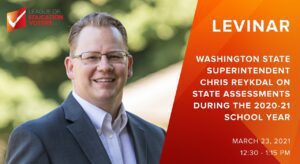 In this webinar, Washington state Superintendent of Public Instruction Chris Reykdal outlined what he knows about this historic and challenging year’s requirements for state testing and answered your questions.

This LEVinar was meant to be a forum and opportunity for discussion, questions, and understanding about an issue that will affect many families this spring. Our goal is to support families in better understanding what to expect regarding statewide assessments.

END_OF_DOCUMENT_TOKEN_TO_BE_REPLACED 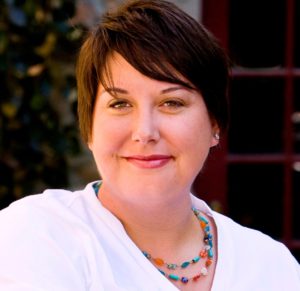 In this episode, League of Education Voters Communications Director Arik Korman asks Glenna Gallo, Assistant Superintendent of Special Education Services at the Office of the Superintendent of Public Instruction (OSPI), about her career path, what she sees as the biggest opportunity in Washington state to support students with disabilities, and how she would change the broader education system if there were no budgetary constraints.

END_OF_DOCUMENT_TOKEN_TO_BE_REPLACED 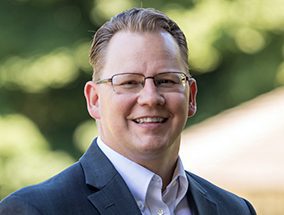 In this latest episode, League of Education Voters Communications Director Arik Korman sat down with Washington Superintendent of Public Instruction Chris Reykdal to discuss his office’s statewide survey on funding priorities, how the survey informed his budget ask for the 2019 legislative session, and how we can get involved in making these priorities a reality.

END_OF_DOCUMENT_TOKEN_TO_BE_REPLACED

It’s that time – March Madness culminates in the crowning of a champ. Go Dawgs!

The Zags’ road to a championship notwithstanding, then there were three. State budgets that is. A week after the Senate put forward their $43 billion spending plan, the House has issued their $44.9 B budget. The plans differ in a couple of key ways: the obvious difference in size and how to pay for things. With many expecting legislative overtime, the path to agreement is almost always compromise, something that did not go unnoticed by OSPI chief Chris Reykdal. One thing is for sure, our kids need a resolution that helps them succeed. And that doesn’t mean cutting back on out of school programs and supports like the POTUS’ “skinny” budget does. I wonder if the skinny budget isn’t just “hangry.”

One thing not included in the House budget: alternatives to the state exams currently required to graduate. That’s because the House removes the requirement for the tests – and therefore their alternatives. I think you know how I feel. Others agree.

Before we go, I want to send a huge thank you to all who joined us for the LEV breakfast yesterday. The messages of hope and love for their work came through loud and clear from Teachers of the Year Kendra Yamamoto and Elizabeth Loftus! Many thanks to them for their wonderful insights – and for their leadership in their regions.

And as always, many thanks to you for the work you do to support Washington’s kids!

A big hello dedicated readers, it’s that time again. On Sunday two teams will line up and go at it for a championship. Yes! It’s Puppy Bowl XIII!!! The annual festival of cuteness featuring puppies “playing football.” And as if your heart couldn’t take any more, not one single little drop, they’re all – ALL! – up for adoption. OMG Becky look at that pup! This year’s event will feature special needs puppies – quick, someone tell Betsy DeVos! – including the ironically named “Lucky,” who has three legs. So if you grow tired of Super Bowl ads, or looking at the Patriots Coach who shall not be named, you have alternatives.

And now, the news:

The aforementioned Secretary of Ed nominee, Betsy DeVos, lost two key republican votes this week when Senators Murkowski (AK) and Collins (ME) both announced they would vote against her confirmation – despite voting to pass the confirmation out of the Senate Committee on Health, Education, Labor and Pensions (HELP). Her support for vouchers and her lack of experience with public schools were of critical concern to both senators. She also displayed a surprising lack of knowledge about federal laws on special education. With Murkowski and Collins in the “no” column, the vote count currently stands at a tie – one that will undoubtedly be broken by Vice President Pence in what would be an unprecedented tie breaker for a cabinet position. It looks like the vote may take place on Monday.

Closer to home, both the House and Senate now have education proposals, as does Governor Inslee. You can find a comparison of the plans here. After a hearing on Monday, the Senate’s already voted theirs over to the House (albeit along party lines). The Senate’s plan that was made public just as we went to hit “send” last week includes changes to the way we budget money, based on students rather than staff, makes big changes to the levy system and tweaks the state’s accountability system.

The House proposal invests more resources in programs that provide supports and interventions for kids including the Learning Assistance Program (LAP), the Transitional Bilingual Instructional Program (TBIP), and Career and Technical Education (CTE). The House also picks up the cost for compensation – a requirement of the Supreme Court ruling – and invests money in professional development for our educational workforce. The funds would flow in a manner similar to how they flow now, without the same guidelines that Senate Republicans put forward in their bill.

Superintendent Reykdal did double duty, issuing a statement and making an appearance at the Senate hearing. You can find him at the 50-minute mark of the hearing. You can also find Superintendent Reykdal here, in Podcast form. And just because I know everybody loves a treasure hunt, you can find all the education bill news here, on our bill tracker.

Other news that made the news this week:

Well, kids, that’s it for this week. And heck, it should be more than enough to see you through. Next week we will see further action on the education plans introduced in both chambers, we’ll hear about the importance of fully funding the State Need Grant, and someone famous will undoubtedly show us their baby bump. Good times.

Have a great weekend! And as always, thanks for all you do for Washington’s kids.

Korsmo’s Weekly Roundup: Olympia is Back in Business

Ready or not: They’re baaaaacccckkk! Olympia is back in business. A lot has happened since last we were in session. There was that presidential election that you might have missed.  I mean if you were in a cave. Or a coma. After a nearly two year campaign season, America has a new TOTUS! Our Tweeter of the United States has been busy building out his cabinet including Secretary of Ed pick, Betsy DeVos whose confirmation process is being delayed to allow for her to complete disclosures to the Senate.  Expect a DeVos administration to support expanding school choice – including vouchers – and to turn the other cheek on most measures of accountability.

Closer to home, we have changes of our own, including new Committee Chairs and Ranking Members of Education for the House and Senate Republicans. And the loss of Andy Hill will be felt all over the place.

In addition, a new Superintendent of Public Instruction, Chris Reykdal, was sworn in this week. What’s not new? Oh, there’s lots of old familiar to be warmed by. Resolving the McCleary decision looms like that worn old recliner: to re-cover or replace, that’s the question. There’s a new rub to the story, though, as school districts are worried the state won’t address education funding quickly enough and school budgets will go over a “levy cliff” – expanded levy caps that will expire.

You can learn more about what we think by reading our latest blog series. And you can give some of your own input by visiting the Campaign for Student Success. In fact, it would be great if you’d join in the growing coalition to support more targeted resources for our kids.

While education funding is going to take up a lot of the oxygen in the room, there are a lot of other education issues that will be introduced and considered – you can find them all here on our bill tracker.

Thankfully, one thing we can always count on is you. Thanks for all you do for Washington’s kids – and all you’re going to do this session to ensure that our funding system helps our kids get the education and experiences they need to succeed.